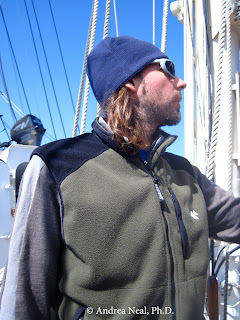 Today, Dr. Michael Gonsior, one of our co-principal investigators, collected another set of water samples at 200 meters depth and at the surface for dissolved organic matter (DOM) analysis. DOM is an important part of the global carbon cycle. The amount of carbon in DOM in the oceans is equal to carbon in atmospheric CO2 and also to carbon present in all land-based biomass. However, this important component of the carbon cycle is not well understood due to the fact that 80% of the molecular composition is unknown. Without a molecular understanding, the reactivity of this highly dynamic DOM pool cannot be evaluated.

Only recently, a new analytical technique referred to as “ultra-high resolution electrospray ionization Fourier transform ion cyclotron resonance mass spectrometry” (ESI-FT-ICR-MS) became available to analyze the complex pool of dissolved organic molecules in an unsurpassed fashion. The samples taken during this research cruise are the first collected in the Pacific Ocean for ESI-FT-ICR-MS analysis. In addition to basic research of DOM characterization in surface waters, the leaching of DOM from marine debris will be also studied. The hypothesis is that biota associated with DOM does produce a significantly different pool of DOM and therefore have the potential to influence the DOM dynamics and composition in open ocean surface environments. If this hypothesis holds, it will be seen later after the analysis at the Helmholtz Zentrum Munich in collaboration with Professor Philippe Schmitt-Kopplin. Dr. Gonsior was always interested in science and found chemistry very interesting throughout high school and college inHueckelhoven, Germany. As a teenager, environmental problems concerned him and he experienced the effectsand news coverage of the 1986 Chernobyl nuclear power plant accident in the former Soviet Union. He began his study of chemistry at the University of Aachen, Germany, and changed universities for his postgraduate study in environmental chemistry at the Friedrich Schiller University in Jena, Germany. During his studies, he took all opportunities to travel and study abroad including five months at Strathclyde University, Glasgow, Scotland and nine months at Dalhousie University, Halifax, Canada. Dr. Gonsior dedicated as much time as possible to travel and learn about people and cultures. Not completely satisfied with his M.Sc. in Environmental Chemistry, he completed a second master’s degree in Environmental Protection Engineering at the University of Dresden. Dr. Gonsior became involved in soil science, and took an opportunity to work on an international carbon cycling program in the mountain rainforest in southern Ecuador. During his nine months in Ecuador, he was exposed to the complexity of life in developing country. 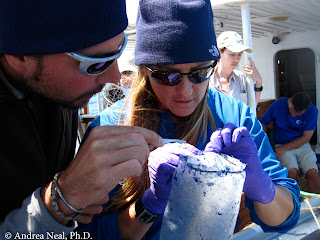 After finishing his second M.Sc., Dr. Gonsior decided to complete a doctoral program in marine chemistry and applied for a scholarship to Otago University, Dunedin, New Zealand. The application was approved and Michael started his Ph.D. study in New Zealand in 2004 under the supervision of Professor Barrie M. Peake and Bill J. Cooper, a professor from the University of California, Irvine (UCI). Bill J. Cooper and Dr. Gonsior became good friends while in New Zealand.

After he finished his Ph.D. degree in 2008, analyzing dissolved organic matter in New Zealand’s natural waters, Dr. Gonsior was invited to apply for a post-doctoral position in Bill Cooper’s laboratory at the Urban Water Research Center, Department of Civil and Environmental Engineering at UCI. His application was accepted, and he works in this laboratory to the present day. Besides being enthusiastic and engaged in marinechemistry and biogeochemical cycles, he also followed his passion for helping people in developing countries, and became vice-president of the non-for-profit, volunteer organization Engineers Without Borders, Orange County Professional chapter. Since that time, he has been involved in a humanitarian project to build a footbridge in Kenya to help local communities to access a small clinic on the opposite site of a river.

Dr. Michael Gonsior in The Rigging 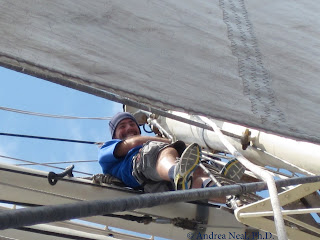 Dr. Gonsior’s first exposure to the influence of marine debris on life happened while he was still working on his Ph.D. in New Zealand where he learned about threats to albatross at the local albatross colony on the Otago Peninsula. Being fascinated by these birds that were always present during his research cruises in the Southern Ocean, he found out that albatross breeding on the Midway Islands in the Northern Pacific Ocean feed their chicks plastic debris accidentally mistaken as food. Hence, the death rate of albatross chicks is very high due to starvation. While working at UCI one year later, Dr. Gonsior attended a seminar given by Captain Charles Moore from the Algalita Foundation in Long Beach, California about the accumulation of marine debris in the North Pacific Gyre. Dr. Gonsior was astonished to see the degree we have polluted our world’s ocean. Together with Professor Bill Cooper, they decided to help educate the world and further scientifically evaluate marine debris in the North Pacific Gyre. They also extended the research into the Atlantic Gyre located in the Sargasso Sea. Earlier this year, Dr. Andrea Neal met Bill Cooper and told him about Project Kaisei. Later, she also went to the UCI laboratory where she and Dr. Gonsior started to develop scientific objectives for Project Kaisei.

Dr. Gonsior’s future plans will involve an extended time in Kenya to help the Engineers Without Borders project. His scientific goals involve using state-of-the-art analytical techniques to investigate the least known components of the global carbon cycle, which happens to be located in his favorite environment: the world’s ocean. He will also continue to educate people and, in particular, high school students, to learn how we can prevent spoiling our oceans. Scientific research of marine debris will continue and will help to give further evidence of the frightening situation of pollution in marine environments.