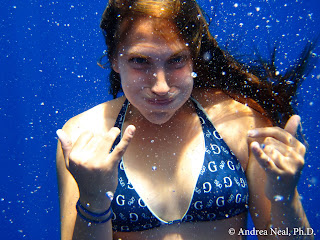 Today, Nicole Argyropoulos, one of our co-principal investigators, assisted Dr. Neal in her multi-tiered filtration analysis. On a ship, feeding ocean water through a drip system can be a challenge; however, Dr. Neal and Nicole finally devised an effective gravity-fed system that functioned as needed to process samples. Nicole joined the Project Kaisei Science Team (PKST) in a multi-faceted position: creating first drafts of the science blog, assisting in research, and coordinating educational outreach material.The catalyst for Nicole’s environmental zeal began with a deep-rooted love for animals. She subscribed to the Wildlife Fact File at age seven. Her mother could only get her to the dentist if she agreed to take Nicole to the Humane Society afterwards to walk the dogs. With an introduction to the greenhouse effect in third grade, Nicole took action in her own house and

introduced her parents to an entire recycling program, from plastics to compost

. Becoming fascinated with the ability for waste to become fertile soil, she started working with her grandmother to plant organic gardens and to learn about sustainable agriculture. Her first job was at the farmer’s market selling peppers at a local Santa Barbara stand.

Growing up by the ocean, Nicole was constantly tide pooling and enjoying the sea’s splendors. Throughout high school, she took many environmentally focused classes and volunteered in trail building, beach clean-ups, and seminars geared towards educating the public about environmental issues. 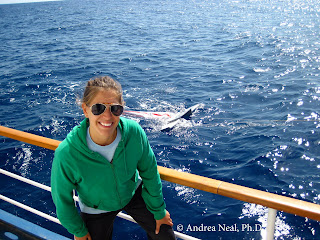 Nicole chose to attend the University of Colorado at Boulder for their excellent natural science program. While attending, she became very active in the university arena, joining the Biodiesel Committee, The Alpine Club, and the Journalism Board, writing about environmental issues in the Boulder area. In her senior year, Nicole flew to New York to volunteer at the Clinton Global Initiative as the CEO’s assistant. The Clinton Global Initiative is a three-day meeting of some of the most influential minds gathered to help solve some of the world’s most pressing issues. Nicole was inspired by the call for immediate action. After she graduated from CU Boulder in Geography, Nicole packed her bags and worked for the Clinton Foundation in the Clinton Climate Initiative (CCI). At CCI, Nicole conducted baseline research, created sustainable design models and approaches, and wrote proposals for the Energy Efficient Building Retrofit Program, which aims to help 40 of the world’s largest cities reduce their carbon footprint through green architectural design.

While working for CCI, Nicole was introduced to the Rocky Mountain Institute (RMI) during a presentation on their sustainable design objectives for their energy-efficient retrofit of the Empire State Building. Amazed by their presentation and contribution to the environment, Nicole applied to work at RMI the following spring. Upon receiving the job, she packed her things once again and moved back to Boulder, Colorado. Following her passion in green architecture, she was placed on the Built Environment Team to work in sustainable design and as a liaison to the Communications Team. Throughout her time at RMI, Nicole conducted a plethora of case studies showing how green architecture was becoming increasingly popular due to its economic benefits. Nicole also led wilderness therapy trips through the Rocky Mountain Range teaching the importance of biology and backcountry skills. Inspired by her experience working at RMI, Nicole plans to continue her graduate education in environmental economics and policy. 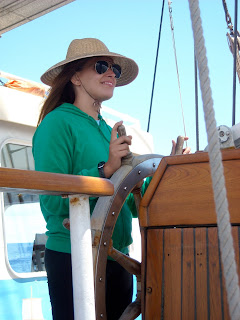 After her rocky mountain adventure, Nicole returned to hometown Santa Barbara to take pre-requisite classes for graduate school. There she started working for Jean-Michel Cousteau’s Ocean Futures Society where she met Dr. Neal and started becoming involved in many grassroots campaigns and organizations geared towards addressing marine debris. Being back by the coast after six years and seeing how detrimental effects of dumping waste in oceans was becoming an increasing concern, Nicole became more involved with the oceanic community. After working on many environmental projects and teaching seminars with Dr. Neal, Nicole was invited to be a part of PKST. Still holding true to her early environmental aspirations as a child, Nicole will continue her career with innovative groups trying to heal the planet. Her involvement in Project Kaisei has shown her the results of our “wasteful” actions and has solidified her ecological path. She is moving to the San Francisco Bay Area after the voyage and looks forward to embracing this paradigm-shifting city.

Posted by Blue Ocean Sciences at 10:18 AM