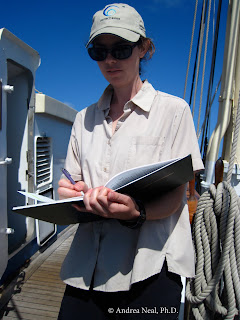 One of our co-principal investigators of the Project Kaisei Science Team (PKST), Corinne Hume, started her day counting plastic pieces visible under the triangular net of the bow. Total counts of visible plastics in a given area for 30-minute intervals help the Kaisei team measure relative densities of surface plastic debris. When we encounter a high-density area, Captain Mike Smith slows the ship Kaisei and circles the area to allow PKST to get as much sampling data from these areas as possible. Our engineer Norton Smith has also used these opportunities to launch his debris-collection prototypes. Later in the day, Corinne assists with processing manta trawl collections and recording data. Corinne first became interested in marine debris while writing about the North Pacific Gyre and accumulation of oceanic plastic debris for an undergraduate journalism class. A few years later, Corinne’s mother, Denise Hume, became involved with Project Kaisei as a representative of the California Environmental Protection Agency’s Green Chemistry Initiative. Working for the State’s Department of Toxic Substances Control, Denise Hume conducts research on environmental health and develops strategies for pollution prevention. While living in Simi Valley in 1989, Corinne was introduced to environmental problems at a young age when a nearby plant accidentally released chlorine. The entire city was evacuated; thankfully, the chlorine gassed without causing any harm to the community. 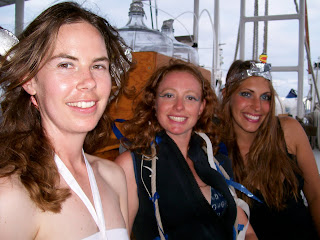 Corinne also appreciated the beauty of nature while frequently hiking through Southern California. Corinne’s mother was a docent of the Sierra Club at the time, and Corinne’s connection with nature throughout her childhood led her to become involved in environmental restoration projects. While attending a private high school in Ojai, Corinne and her class went to Chennai, India, to participate in a sea turtle protection program. During the project, Corinne helped newly hatched sea turtles that commonly get off course due to light pollution find their way to the ocean. Also while in India, Corinne helped a rural school in Rishi Valley expand their permaculture garden and provide more medicinal and food crops for their community. During her time in India, she was surprised by the amount of pollution permeating the land, air, and water. She vividly remembers the residue of the air staining her hands a burnt sienna color and the heaps of trash lining the streets. This impression led her to become concerned about the health of our planet.

In college, Corinne attended a colloquium hosted by the European Union in Ghent, Belgium, about recycling agricultural byproducts and exploring the possibilities of turning what was once waste into commodities. During this colloquium, she visited different manufacturing plants, such as the EcoVer, which makes sustainable household products from a zero-waste business model. 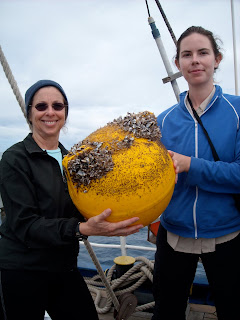 The colloquium’s purpose was to allow college students from around the world to brainstorm about incorporating agricultural byproducts into business design. While in school, she also worked at the Pathogen Detection Lab of the California Regional Primate Research Center at the University of California at Davis (UCD). A recent graduate from UCD with a B.S. in Natural Sciences, Corinne was invited to sail on the S/V Kaisei as a research assistant. She was intrigued by the opportunity to see parts of the North Pacific Gyre and hopes to learn more about environmental problems and the planet’s ecological state through first hand experience with Project Kaisei. Corinne also looks forward to sharing information from this trip with family and friends at home.

Posted by Blue Ocean Sciences at 11:02 AM