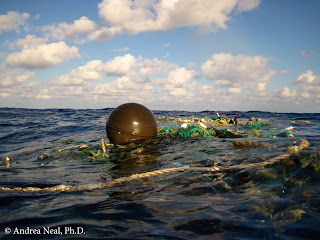 "Solving a problem starts with knowing that you have one. Project Kaisei vividly shows how discarded plastics are clogging the ocean, causing a major problem for the planet's vital blue heart, entangling marine life and insidiously killing as it accumulates in the food chain, from tiny plankton to great whales. Best of all, the mission hig

hope with ideas for positive action." 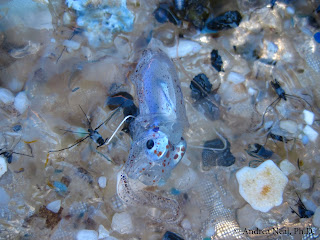 During our time in the gy

re, we have found variable amounts of biota

in our trawl samples, primarily jellies and other invertebrate organisms. Today, Heather Coleman and H

amish Currie, one of ourloyal crewmembers from New Zealand, went hunting on the dinghy for large, recognizable pieces of marine debris. They recovered and brought onboard three plastic crates, numerous

lids, shards of plastic, buoys, buckets, and plastic trays. The big hunt for marine debris throughout the North Pacific Gyre showed that the sources of origin are diverse. Many of these large floa

“shelters” provide a safe haven for oceanic creatures; we have common 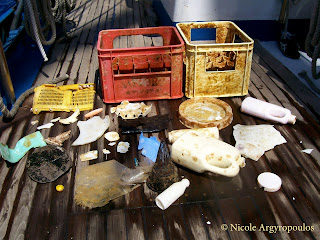 llowtail and pilot fish (jacks family), gooseneck barnacles, and crabs. Dr. Michael Gonsior seized the opportunity to cast his fishing pole into the large school of fish beside the boat, catching a small yellowtail fish. Dr. Margy Gassel dissected the fish, preserving the organs in a gluteraldehyde solution and freezing musc

le tissue for analysis of persistent toxic chemicals. Continuing on our intensive research schedule, we lowered the Conductivity Temperature Depth (CTD) Profiler into the water. The CTD we are using measures salinity, temperature, depth, dissolved oxygen, and chlorophyll. In addition, we trawled on four separate occasions during the day to maximize collections for educational outreach.

After an afternoon of sampling, a monstrous ghost net was spotted 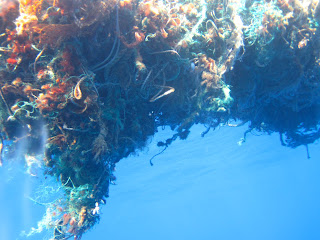 essly in the ocean. This net, initially comprised of discarded rope, had gathered a number of items caught within its turbulent path, such as buoys, fishing line, the lower half of a chair, and a large gill net. The ghost net was so heavy that we were unable to haul it out of the

water and onboard S/V Kaisei, even with all 25 participants pulling lines. Therefo

re, we had to rethink our plan of action and decided to send Dr. Gonsior and Norton Smith in a small boat to cut the ghost net in half. After numerous efforts to sever the net into smaller pieces, we managed to bring what we could salvage (about half of the net) on board as the sun set into nightfall. As we watched the other half drift out into the ocean, we recognized how ineffectual we were in relation to this massive problem.

We are now into the l

atter half of our journey and have seen disturbing evidence of the marine debris problem in the North Pacific Ocean. We hope that one outcome of Project Kaisei will be increased knowledge about marine debris and its impacts on one of our keystone environments—the ocean—and organisms that rely on it, including ourselves.