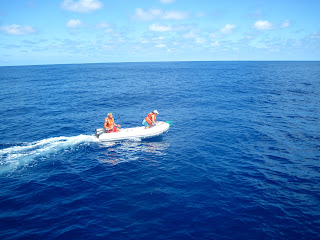 “Most of our samples will not be identified until we get back to shore but the visual interpretations are astounding. It is vitally important that we make a huge change in our habits. It is imperative that we start managing all of our resources wisely”- Dr. Andrea Neal

Today is final day of small boat collection for marine debris in the Subtropical Convergence Zone of The North Pacific Gyre, led by Nicole Argyropoulos and Ryan Morris. As Ryan and Nicole gathered the appropriate nets, they checked in with the crew aloft and on deck to help announce any debris they spot near the small boat. While at sea, they found a plethora of items, including a sand castle mold, half of a soda bottle crate, a laundry basket, buoys, plastic water bottles, Styrofoam floating aimlessly on the top of the water, nets, strainers, and an abnormally large red light bulb. With constant sightings of marine debris from the ship, collecting these large pieces was easier than anticipated.

In our studies in the North Pacific Gyre we have been filtering surface water samples to look at not only very fine debris, but nano-sized debris. Recent nano-toxicology publications have brought attention and urgency to understanding possible mechanisms of toxicity, and environmental impacts of exposures to sub 100 nm nano-structured materials. As research continues, we are finding more ways that nano-structured materials can be toxic: from the asbestos like qualities of carbon nanotubes1, to acute toxicity to aquatic invertebrates from nano-sized titanium dioxide 2-4, and the possible toxic impacts of nanoparticles on environmentally prevalent bacteria 5. The effects of nano-structured material waste from industrial production and consumer goods is becoming a prominent issue with the increased incorporation of these materials into everyday items ranging from facial cosmetics, batteries and even appliances 6. It is now known that plastic resin pellets and broken bits of consumer plastics carry certain classes of POPs in greater concentrations than virgin polyethylene pellets 3-5. What all of this means, is that our oceans are being impacted by both visible and non visible pollutants. These toxins are not only impacting life in the ocean they are also impacting us. However, how all of these pollutants interact with ocean biota, people, and even other toxins is a very complicated story that needs further study.

Currently, we are 700 miles off shore and the majority of identifiable marine debris seems to be from the Western Pacific. The North Pacific Gyre is generated by the easterly trade winds and the westerlies in the north. The wind movement forces the water to move in the same direction. These two wind systems create opposite water movements and in combination with the Coriolis Force creates a vortex, in this case the North Pacific Gyre. The western boundary current of the North Pacific Gyre is the Kuroshio current off the southern coast of Japan extending eastwards across the Pacific. The eastern boundary of the gyre is defined by the California Current flowing initially south before it converges towards the west, completing the rotation of the North Pacific Gyre. The Kuroshio Current is analogous to the Gulf Stream in the Atlantic Ocean as part of the North Atlantic Gyre. Therefore, it is not surprising to find marine debris from the Western Pacific, as well the Eastern Pacific Ocean including California. Identifiable marine debris may help to further evaluate the origin of this debris.